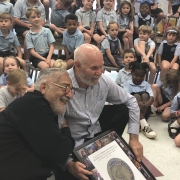 Our Dear Teachers and Parents,

In the most basic form, human beings need to satisfy both their physiological and psychological needs to sustain a longer and happier life. As part of their physiological needs they require clean air, fresh water, food, shelter, and health. Their psychological needs include love, security, acceptance and a sense of belonging which contributes to the creation of their identity and character. These similarities are universal and do not change regardless of the superficial differences we set amongst people including race, religion, gender, social class and language. These superficial differences are the consequences of the randomness of birth predisposed by different nationalities, familial structures, and extensive circumstances.

While the similarities can be used as a factor to bring people closer together, the superficial differences can be used to create a sense of fear and threat thus causing antagonism and conflict.

A more harmonious, balanced and prosperous society seems to be the one that builds on similarities and devalues the differences. Sympathy is an expression of our concern for the pain and misery of others, and empathy is the act of helping to relief their pain. To build on the similarities, and relegate the threat the differences may project, we need to encourage sympathy and practice empathy particularly amongst the children of today who will not only be custodians of planet Earth and but also the guardians of the life of tomorrow.

Besharat Arts Foundation launched the project “Art in School” in hopes that the daily contact with art which represents similarities, whilst embracing the cultural differences, will further promote sympathy and empathy amongst children.

The Foundation’s goal is to run the project in schools both in Georgia, USA and Barbizon, France. It is projected to be gradually extended on outward territories. The intention is to turn schools into exhibition spaces in which works of re­nowned artists (such as Steve Mc Curry) will be displayed to promote thought provoking opportunities leading to discussion and dialogue amongst the pupils.

The project is designed to focus on elementary and middle schools because younger children are more susceptible to accept new ideas and new ways of doing things.